A play they’ll enjoy, Manitobans will 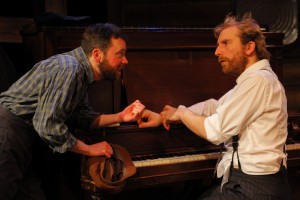 What wants a man with a broken piano in an isolated woodbox of a home on the windswept Manitoba prairie in the 1930s?

The answer is at the clappering heart of Armin Wiebe’s lusty romantic folk tale The Moonlight Sonata of Beethoven Blatz, which had its premiere staged before a full house at the Rachel Browne

Theatre Thursday night.For such a man as Obrum Kehler, a Mennonite farmer two years into a happy but childless marriage with his beloved Susch, it is a question of procreation. For the title character, an eccentric Russian immigrant composer tasked with repairing the Klavier, it is all about finding a new muse to spur his creation.

Sure we are not of too much else, as the mischievous Wiebe, the award-winning Winnipeg novelist, makes his successful playwriting debut with a deceptively simple plot complicated by his quirky characters reversing the order of the words they speak like so many Mennonite Yodas. Combine that with Obrum’s knack for talking in metaphors, “he speaks double sometimes,” and communication breakdowns there will be. Did Obrum hire Blatz to tune his piano or his wife?