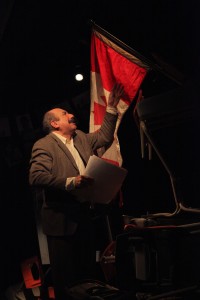 There’s something sadly, terrifyingly beautiful in the set the greets the audience entering Theatre Projects Manitoba’s production of Bashir Lazhar.

A twisted wreck of school desks, bright orange plastic chairs, and the remnants of window frames, it’s a scene that implies something unthinkable has happened – and yet also suggests the innocence and possibility of childhood.

And this is an apt metaphor for Quebecoise playwright Evelyne de la Chenelière’s one-man play (which inspired the Oscar-nominated film Monsieur Lazhar). It is full of sadness, humour, and hope, in a mixture that flows from horrifying to hopeful. And here, it makes for a rich, emotionally rewarding theatrical experience.

The play centres on the title character (a masterful solo performance by David Adams), an Algerian refugee who becomes the substitute teacher to a sixth-grade class shaken by a tragedy at the school.

From the start, though, we see that Bashir is well-intentioned, but ill-suited to the job. De la Chenelière introduces him to us as he rehearses his greeting to the class, unsure of who he should be – a friend? A disciplinarian? A dispassionate sage? Bashir seems certain only that he needs to teach – and as his own tragic backstory unfolds, we begin to understand why.