CBC Review: Heiress looking for a man to seduce her…and you can watch

It’s the audience who is ultimately rewarded with this sparkling, fantastical romantic comedy. 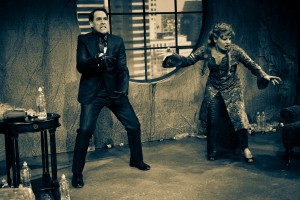 A wealthy heiress offers a “substantial reward” to the man who can successfully seduce her – this is the premise that kicks off Quebecois playwright Carole Fréchette’s John and Beatrice, which opens Theatre Projects Manitoba’s season.

But it’s the audience who is ultimately rewarded with this sparkling, fantastical romantic comedy.

A modern fairy tale for grown-ups, the play begins with John (Kevin Klassen) climbing to the 33rd floor of the otherwise-abandoned building where Beatrice (Tracy Penner) has sequestered herself.

Through posters plastered around the city, Beatrice – the veritable princess in a tower – has promised a reward to the man who can pass the challenges she has devised to win her heart, and end her romantic drought. John, a pragmatic bounty hunter whose true love is $20 bills, decides to take on the task.