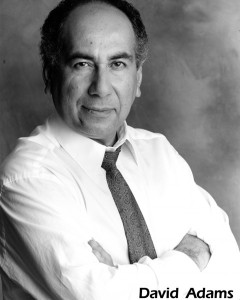 We are delighted to have imported David Adams all the way from Vancouver, BC to take the starring role of Bashir Lazhar. David is a jolly, gregarious, kind and talented fellow, and we are so lucky to be working with him! We managed to grab David for quick e-chat earlier this winter, while he was busy out west playing Tevye in a production of Fiddler on the Roof.

TPM: What drew you to work on Bashir Lazhar?

DAVID: The play has many wonderful elements – its humanity, the themes of loss and rebirth, its inherent theatricality and its exploration of the wonderful relationship between teacher and student. Also, as an immigrant myself (from South Africa), I was fascinated by Bashir’s struggle to fit into his new surroundings and understand his new country. The transition was a fairly easy one for me, but the struggle to find one’s place in an adopted country has always interested me.

TPM: You act for film, television, theatre and as a voice over artist. What do you enjoy particularly about working in theatre?

DAVID: Film, TV and voice over work, while interesting, lucrative and sometimes exciting and seen and heard by sometimes millions of people, has its own reward. But the special relationship theatre actors have with their audience is a very profound one. Theatre doesn’t exist without an audience-they are a key component of the whole experience. The live reaction, the power to affect and move the audience is what makes a live performance so unique.

TPM: How will you prepare to work on this play?

DAVID: As a one-person show, there are a lot of words! So to make the whole process easier, I will try to be as familiar with all those words as I can before we start rehearsal. For me this usually means reading the play every day for weeks ahead, so that the ideas, the words, the flow of the piece, are firmly in my brain. I will also do a bit of research on Algeria, to find out as much as I can about the country that Bashir comes from. This is an important part of crawling into the skin of the character, so that by the time I hit the stage, I will know a lot about his background, his culture and I can portray him truthfully.