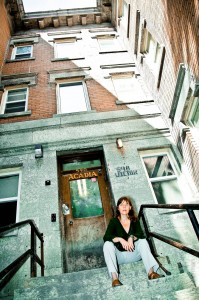 It started as a way to involve everyone in the arts, but what resulted is a play about limitations – and hopeful possibilities.

Debbie Patterson’s one woman show Sargent & Victor & Me, set in and around the West End intersection that is its namesake, was gleaned from a series of interviews Patterson conducted with individuals connected to the area. Each account – be it from a resident, business owner, food bank user, delivery boy, waitress, gangster, or incarcerated teen – brings a unique perspective on the strengths and challenges of this troubled area.

The result is a play that attempts to unlock the mysteries of how neighbourhoods evolve and how we cope with unstoppable processes of destruction.

Patterson began the project when she was Theatre Ambassador during Winnipeg’s Cultural Capital of Canada celebrations in 2010.

“My original goal was to just use the text I developed through interviews with people who have ever lived or worked near the corner of Sargent and Victor,” Patterson explains. “The theme of the Cultural Capital year was ‘Arts for All’ so I wanted to find a way of involving people who don’t generally have a connection with the arts in the creation of a new piece. That’s primarily why I chose to use verbatim text and why I chose that area.”

Since then, the work has seen many incarnations and has been read and performed in Winnipeg, Brandon and Iceland. In one version, four actors performed and Patterson directed – but that staging left her feeling disconnected.

“I missed having a direct connection with the people I had interviewed,” Patterson says. “I wanted to say their words myself because I had, in fact, come to love them all and wanted to honour their voices.”

“I didn’t write anything: my own contribution was as an editor and performer. I wanted their voices to be heard, not mine. I wanted to keep myself out of it.”

But as Debbie worked with the piece, she began to understand keeping herself out was impossible – partly because as an actor with MS, her disease undoubtedly affects the performance.

“That’s when I started writing about MS, using the process of living with an incurable degenerative condition as a metaphor for living in a neighbourhood that’s being overtaken by crime,” she explains.

The team behind the music and sound design is multi-disciplinary artists John K. Samson and Christine Fellows.

“The musical approach we’ve taken is in response to the limitations Deb gives herself in the play, that of one person playing multiple roles. We chose to work with a limited palette, using only two instruments (church basement-style piano and electric guitar), and to keep the compositions fairly sparse,” the husband and wife duo says.

Limitations constrain, but they also force creativity – and in the best-case scenario they can help others understand possibilities. In the case of Sargent & Victor & Me, limitations result in a disturbing, yet hopeful, look at a community on the brink.

Sargent & Victor & Me runs Feb. 27 to Mar. 9 at the Asper Centre for Theatre and Film on the University of Winnipeg campus.

Tickets range from $15-25 and are available by calling the Theatre Projects Manitoba box office at 204-989-2400 or by visiting www.theatreprojectsmanitoba.ca.