In association with the Manitoba Association of Playwrights.

In this original and poetic new work, Lara Rae tells the raw and heartfelt story of her half century long (and counting) gender odyssey. Two actors, one male, one female, illuminate the inner life of a trans woman from her Scottish childhood in the 1960’s to the present day.

Matching our inside to our outside is always hard. For trans people it’s often a matter of life and death. Stripping away the visual cues that both define and imprison transgender people, Dragonfly is a call to all of us to forge creativity from chaos.

Lara Rae is an award winning TV and radio writer, performer and host. She has written and produced for several CBC comedy and drama programs including Afghanada, Little Mosque on the Prairie, Monsoon House, ReVision Quest and DNTO. In 2016, Lara became the first transgender person to host a national CBC news program when she guest hosted The Current. She is the co-founder and Artistic Director of the Winnipeg Comedy Festival and a 30 year veteran of stand-up comedy.

A Note on Content: Dragonfly is an autobiographical, poetic journey that uses language, memory and storytelling as tools to explore the writer’s  life. There are mature themes such as substance abuse, addiction, suicide and sexual violence. The language can be strong and evocative. 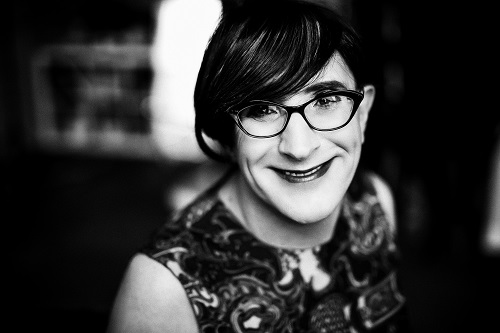 Lara Rae is a TV and radio writer and producer, comedian and host. She was the creator of the CBC Radio series Monsoon House with Russell Peters, a 20 part half hour comedy drama. Lara was one of the developers of the international hit series Little Mosque on the Prairie for which she shared two Geminis, two Canadian Comedy Awards, and an Italian Prix Roma writing prize. Other TV series include Blackfly (Global) and Big Sound (Global) and the radio series Afghanada (CBC Radio). For theatre, she had written several shows. The show Unscheduled Stop with George Westerholm was nominated for the prestigious Perrier Award at the Edinburgh Fringe (1989) and played at Hen and Chickens Pub Theatre (London, U.K. 1990) How Do You Know When You’re Done? with Dean Jenkinson, based on the creation of Unscheduled Stop played at Tim Sims Playhouse, Toronto (1999). Dragonfly begin life as One Man’s Show with Sarah Constible at Carol Shields Festival of New Works (TPM, 2010)  In 2016. Lara was the first transgender person to host a national CBC news program when she guest hosted The Current. Lara is the co-founder of the Winnipeg Comedy Festival and a 30 year veteran of stand up comedy. 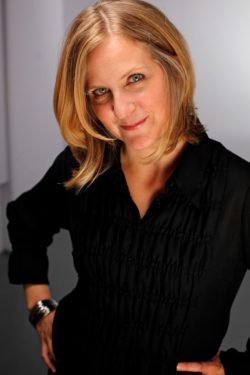 A graduate of the University of Winnipeg, Ardith has performed with Prairie Theatre Exchange, Manitoba Theatre for Young People, Theatre Projects Manitoba, Adhere and Deny, and the Royal Manitoba Theatre Centre. Selected acting credits include Three Sisters with zone 41/TPM, Shakespeare’s Dog at the RMTC/National Arts Centre, Zaidie’s Shoes and The Norbals at Prairie Theatre Exchange.

Ardith won a Blizzard Award in 2004 for her performance in Jeffrey Erbach’s feature film, The Nature of Nicholas. She has appeared in Canadian films such as The Stone Angel and Milgaard. In 2009, Ardith was nominated by her peers for the Making a Mark Award which applauds established artists who are receiving critical recognition for excellence in their art practice in Winnipeg and beyond.

In 2005, Ardith took the reins as Artistic Director of Theatre Projects Manitoba where her directing credits include Beautiful Man, Iceland, Proud, John and Beatrice, and Linda Griffith’s Age of Arousal. 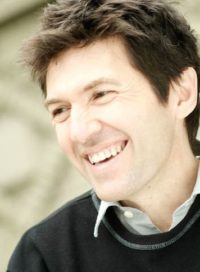 Brian Drader is a writer, dramaturg, actor, and artistic administrator.  His plays have been produced in Canada, the United States, and Europe.  Awards for his writing include the Herman Voaden National Playwriting Award, the Philadelphia Brick Playhouse New Play Award, and the prestigious Lambda Literary Award for Drama (USA), as well as nominations for the Governor General’s award and the McNally Robinson Book of the Year.  Published work includes The Norbals, Prok and Liar (Scirocco Drama), and Cursty and To Be Frank (Signature Editions).  Commercial engagements include writing the audio components for Indiana Jones and the Adventure of Archaeology and video components for Star Wars Identities, both touring museum exhibitions (gsmprjcts/Lucas Films/National Geographic), dramaturg for Cirque du Soleil’s MJ ONE at the Mandalay Bay in Las Vegas (now in its 6th year), and dramaturgical support for the 2017 revamp of The Canadian Museum of History in Ottawa.

Brian served as the Director of Playwriting at the National Theatre School of Canada in Montreal from 2004 to 2017, and is now the Executive Director of the Manitoba Association of Playwrights. 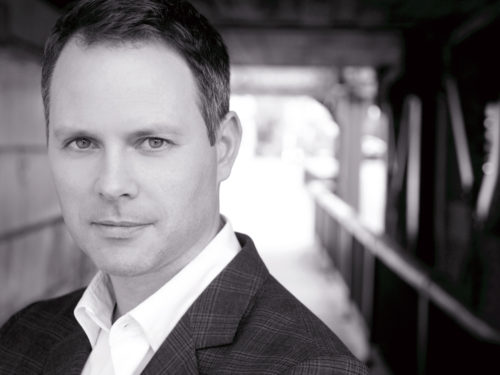 Eric has acted for several major theatres in Winnipeg and abroad including The Royal Manitoba Theatre Centre, Prairie Theatre Exchange, Theatre Projects Manitoba, Winnipeg Jewish Theatre, Shakespeare In The Ruins, Manitoba Theatre For Young People, and The Vancouver Playhouse.  He has worked with many independent theatre and film companies, such as Moving Target, Zone 41, Tom Tom Theatre (Winnipeg), Narcoleptic Videographer (Vancouver), Theatre Bagger (Vancouver), Moustachio Theatre (Whitehorse), and Little Theatre of the Gray Goose (Winnipeg), in various roles including that of actor, writer, producer, and director. Blais has worked on over twenty-five film and television productions as an actor and stunt performer. He holds an MFA in Acting and Pedagogy from York University, and a BA Honours in Theatre from the University of Winnipeg. He has taught acting at York University, Manitoba Theatre for Young People, and the University of Winnipeg. 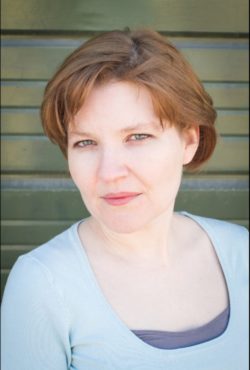 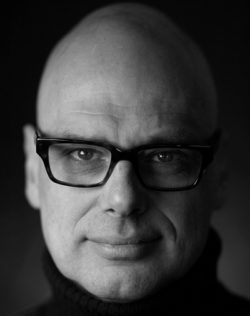 Hugh is a theatrical designer and a photographer who has collaborated with choreographers, directors, visual artists, and dance and theatre companies throughout Canada and around the world, in venues large and small. Hugh has designed many shows for TPM since 2006 and is happy to be back for Dragonfly.  His photographic work resides in private collections and has been published worldwide.

Hugh serves on the boards of several arts organizations and is the curator for the High Octane Gallery at the Gas Station Arts Centre.

Hugh has been a member of the Associated Designers of Canada since 1982 and is a member of l’Association des professionnels des arts de la scène du Québec. 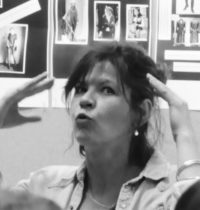 Maureen is always pleased and honored to create with the wonderful artists at TPM. The deep dive taken into transgender and gender on this production has been an amazing growth experience for her. Selected theatre credits include “Elmwood Visitation” (TPM) “King Lear”, “Merchant of Venice”, “Richard II” (SIR). Selected credits, costume design for film and television include “High Life”, “Sunnyside”, “Into Invisible Light”, and coming to theatres this summer, “Stand”, a musical story by Danny Schur, set during the Winnipeg General Strike.
Thanks to Lara Rae for sharing. 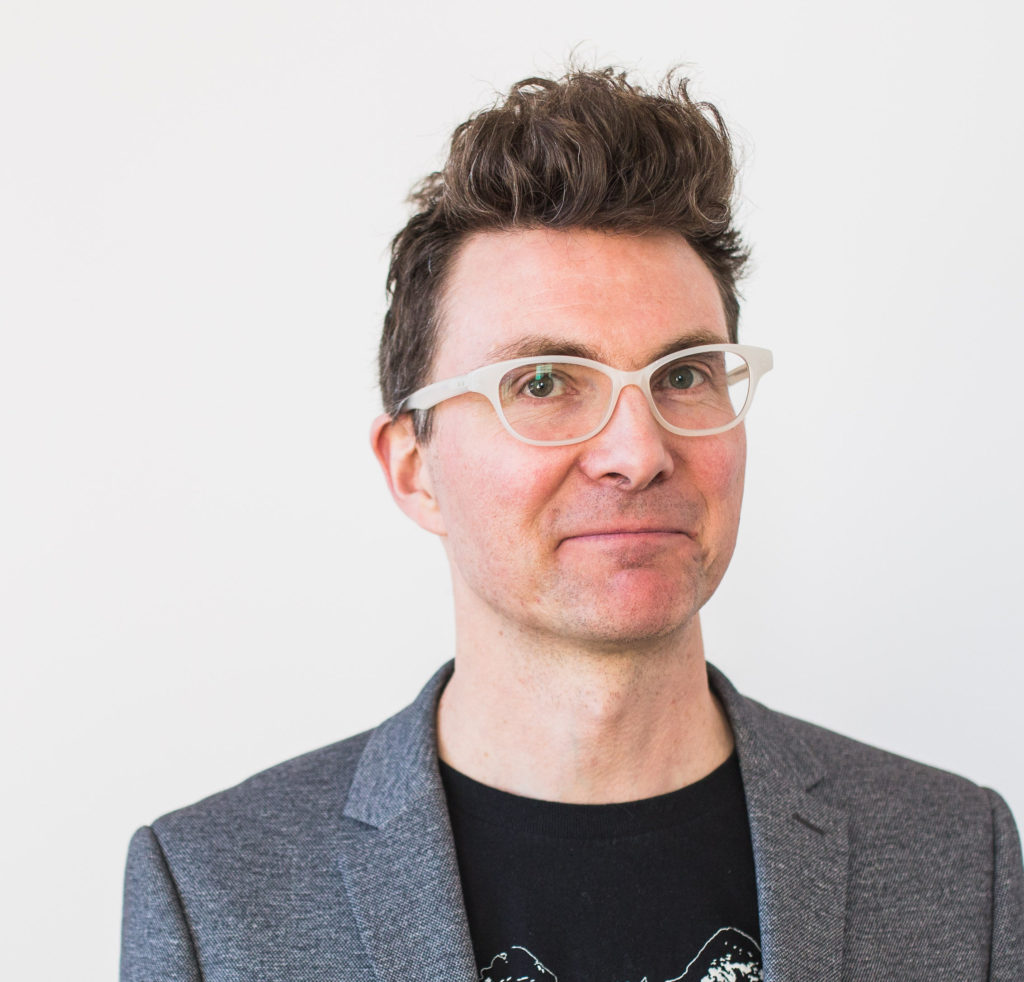 Emma is a sound and installation artist, sound designer, composer and cultural worker.  Through sound Emma builds visceral, expressive environments that explore the narratives of individual experience by revealing and exploring the inherent qualities of sounds, particularly field recordings, found sounds, and ‘machine languages’ of everyday things. Emma creates installations and performances as Manufacturing Entertainment with Julie Gendron, and composes for theatre, dance, video, film and new media installations and performances. Emma’s work can be explored at:  emmahendrix.com + soundcloud.com/emmahendrix 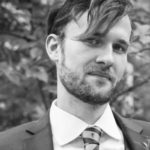 Michael is a graduate of the University of Winnipeg and is excited to be back at Theatre Projects Manitoba, having previously worked on Mary’s Wedding, Iceland, John and Beatrice and Three Sisters (with zone41). Other recent credits include Vietgone, A Christmas Carol, Hand to God (RMTC), New Magic Valley Fun Town, Fly Me to the Moon, The Birds and the Bees (PTE), Timon of Athens, Romeo & Juliet, Richard III (SIR) and Am I Not King? (zone41). Up next, catch Mike stage managing for SIR on Hamlet. Enjoy the show! 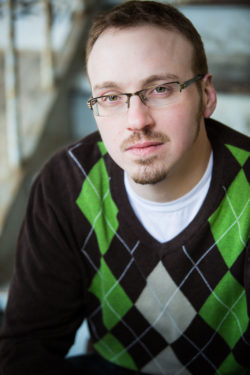 Steven has been working behind the scenes in the Winnipeg theatre community since 2008.  When he is not working with the many amazing theatre companies this city has to offer, he can be found in the Carpentry shop at Prairie Theatre Exchange.  Steven is delighted to be working once again with Theatre Projects Manitoba in the creation of this new work.  Some recent notable credits include The Miser of Middlegate (TPM/ Zone 41), Edward II (TBTR), Angels in America: Perestroika (WJT), and Timon of Athens (SIR).