Smells like brilliant – an interview with Carolyn Gray’s dog

Portrait of the Artist as a Dog Lover 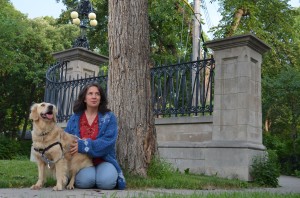 Recently, Ellen Peterson and Carolyn Gray took their respective dogs (Sunny Monday and Minnie Gray) for a walk in St. John’s Park. Afterward Sunny had to be shut in the house for being too neurotic, which gave Ellen a chance to hang out in the back garden and get this exclusive interview with Minnie.

So, Minnie, how long have you lived with Carolyn?

Forgive me, but like most dogs I have a keen understanding of time but fail to understand calendars. So I’m not sure. A while. It was after the Cold Part, but before the Hot Part.

Yes, that’s right. I was a birthday present from Carolyn’s best friend besides me, whose name is Melanie. An organization called Manitoba Mutts rescued me.

Any special challenges in being a playwright’s dog?

Well, sometimes she’s super busy. Like a while ago there was a week when she left the house I don’t know how early to go to her job, and then she would go and have a workshop of her play for… hours, is that what you call them? I didn’t see her much, and when we went for walks she bagged my leavings with a distracted air. I helped out all I could, you know, lots of tail-wagging and face-licking at the end of the day.

I bet that helped a lot. You mentioned her job. I thought she was a playwright.

Most playwrights have to have jobs. It’s the only way they can afford to buy kibble. Carolyn is the Executive Director of the Manitoba Writer’s Guild. She helps people write. Which is extremely important.

Her upcoming play is The Miser of Middlegate. What’s it about?

I couldn’t say. I’ve seen the script around the house a lot but of course I haven’t read it. It smells brilliant, though. I heard Carolyn say she wasn’t really planning to write any more plays but Krista Jackson asked her what she’d write if she was going to write any more plays and Carolyn said “The Miser of River Heights.” Kind of kidding, you know, kind of not, the way people do.

Never. It’s against our nature.

So then she decided to write the play?

She had underestimated Krista Jackson’s power. Krista said that if Carolyn wrote it, she’d support her in every way possible. Except face-licking and tail-wagging of course. But it amounts to the same thing.

Krista is a force of nature.

And other people got in on it too. Theatre Projects did the other two plays in what is now a trilogy, so they were very gung-ho to co-produce.

Why the change from River Heights to Middlegate?

Middlegate has the best fancy houses. And Carolyn liked the idea of being caught in the middle, trying to climb up.

I hear Bruce McManus was the dramaturg.

Yes. I’ve never had the pleasure but Carolyn has been saying a lot of very nice things about him. Funny story: when we go walking in Wolseley there’s this one house I really find intriguing. Go up the steps and sniff around. I can’t seem to stop myself. I think by the scent that they’re cat people but that’s not what I find so compelling. I couldn’t say exactly what it is. This has happened about three times now.

Turns out to be Bruce’s house! Is that weird or what?

Maybe it’s a past life thing.

Or I just have a nose for brilliant. So anyway, all these forces of nature sort of conspired to make her get the play written. She’s been very determined, as I expect she always is, to make the most of the opportunity. A playwright has to be very tenacious.

Well, one might, but I wouldn’t advise it. People are not much like dogs. Take how they see time, for instance.

All this regretting the past and worrying about the future. Longing for things that used to be or haven’t happened yet. Now is all there is. Have a treat, smell the grass!

There’s a dog in Miser. Based on you?

Yes and no. We have to remember that Carolyn’s been working on the play since before I was born, so my influence has been only in the later stages of the play’s development. It is a horse in the original but as soon as she got me she knew what she had to do. Once you’ve lived with a dog it can’t help but inform your aesthetic.

Then can we expect her next play to be entirely about dogs?

I don’t see why not. A four part trilogy would be nice. The story of a dog rescued by a playwright who buys a loveseat and they live happily ever after.

Smells like brilliant to me. Thanks for your time.