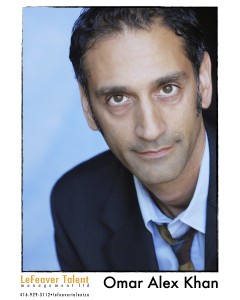 Our next featured artist is Omar Alex Khan, playing the role of Halim in Iceland. Omar has appeared with TPM in the zone41 co-production of Three Sisters, presented in 2011. We had a chance to ask Omar about his career, his passions and his experience with full frontal nudity (!).

You did a show with Toronto’s Cahoots Theatre, The Wanderers, which incidentally had you working alongside Kawa Ada, the actor who premiered the role of Halim in Iceland. Can you tell us more about your experience with Cahoots and The Wanderers?

Cahoots is a small company whose mandate is to produce new works that examine the complexities of cultural and sexual diversity. The Wanderers is a powerful play about an Afghan man’s experience of moving to Canada with his wife and young son. Director Nina Lee­Aquino, who is also the co­artistic director at Toronto’s Factory Theatre, is what people like to call “an actor’s director”, and I’d work with her anytime. Kawa was also very collaborative as a playwright, and was open to making changes right up until opening night. Sometimes the actors would walk into rehearsal and have a page of new lines thrust at them, or have a page of lines cut, so keeping up with the script changes was challenging. It will always be memorable to me for several reasons: it was my first theatre gig in Toronto; it was only the second time that I was involved with the creation of a new play; I got a chance to workshop the play a couple of times and follow its development; and last, but not least, it was my first (and so far, only) time I’ve appeared nude onstage (full frontal, baby!).

The financial crisis didn’t affect me directly. But in doing research for the show it was fascinating and disgusting to see how the lives of so many were affected by the greed and power of so few. One of many galling facts is that after the US banks were bailed out by their government, many of the bank heads and higher ups gave themselves big fat raises.

How did you become a theatre artist?

When I was setting up my grade 11 timetable my best friend decided he was going to take a theatre course, so, being a follower, I signed up too, just because I thought it would be fun. Little did I know it would be life changing.

Any passions or hobbies outside of theatre?

I’m a big hockey fan. I’m also an early childhood educator so when I’m not acting I’m working in a daycare with 2 to ­12 year olds. If I couldn’t spend time with them, there would definitely be a hole in my life.

Iceland is a trio of intersecting monologues. Are there any particular challenges or advantages to working on a show where the characters don’t directly engage with eachother?

We don’t look at each other directly in the show. Sometimes we can see another actor in our peripheral vision but we never get a good look at their face. We don’t get to see the facial expressions and gestures and body language that the other actors are making when they’re speaking. So we’re at a disadvantage because those expressions and movements directly influence how the words are interpreted and perceived. It means that we have to be listening carefully and be fully engaged with what’s happening on the stage.

If you were not a theatre artist, do you have a fantasy, alternate dream job?

My dream job has always been to be an NHL hockey player. I guess we know how that turned out.