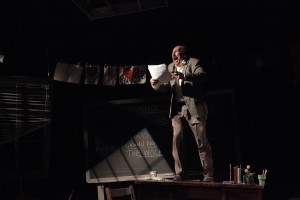 The Winnipeg Free Press review is in:

Four & a half stars!

At first glance at the spectacular set of the stage drama Bashir Lazhar, it looks like a bomb has gone off in the classroom of a French-langauge school in Montreal.

For its Grade 6 students, their safe haven of learning has been blown sky-high by the suicide of their beloved female teacher, found hanging in their classroom. The deceased is not the title character but it’s her substitute, a man who reads about the school tragedy and appears unannounced in the principal’s office offering to take over the traumatized class.