Upstaging the competition for two decades 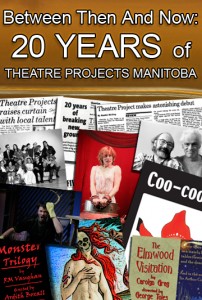 A good way to plug the undervalued dynamo of Winnipeg theatre was to bring its story directly into peoples’ homes.

“There’s still too many people who don’t know the organization exists,” says local actor (and first-time documentary filmmaker) Gordon Tanner, director of Between Then and Now: 20 Years of Theatre Projects Manitoba. The 16-minute MTS Winnipeg on Demand doc is now available to MTS subscribers.

The succinct summary of TPM’s history and mandate comes at an opportune time: TPM celebrated its 20th anniversary and 21st season in 2010. And this very week, it unveils the first foray into theatre by local novelist Armin Wiebe, The Moonlight Sonata of Beethoven Blatz.

The “folk play” is based upon Wiebe’s stories of the fictional southwestern Manitoba town of Gutenthal. It’s primarily that local emphasis the company was founded to champion by now-deceased Manitoba playwright Harry Rintoul (Brave Hearts), to whose memory the doc is dedicated.

“It’s important for people to see their communities — the people, places and values they recognize — up there on stage,” TPM artistic director Ardith Boxall says.

One of TPM’s earliest blockbusters in this regard (and what might be seen as a precursor to Beethoven Blatz) was 1993’s Ce Weekend La, by University of Winnipeg theatre professor Rick Skene.

“People loved it!” Boxall says of the play, set in a Franco-Manitoban community south of Winnipeg. Box office-wise, the show nearly sold out its entire run. “It was a real Manitoba success story that way.”

Another record hit was Carolyn Gray’s 2007 play The Elmwood Visitation, in which Tanner himself starred. Indeed, TPM is referred to in the doc as a sort of “Little Engine That Could” in Winnipeg’s theatre community.

“It proves we can do our own theatre,” Wiebe observes.

TPM’s fuel is its function as a supportive outlet for artists to stretch their muscles. “Beethoven Blatz is another chance to lead with a writer to create something new,” Boxall says. “Not just fall back on old standards.

“These are elements that the city’s larger theatrical institutions just don’t take into consideration.”

Indeed, Wiebe’s view is that TPM has replaced what Prairie Theatre Exchange was in the ’80s; in the doc itself, playwright Rick Chafe — whose The Last Man and Woman on Earth was produced by TPM in 1998 — declares the organization the “experimental place that all artists need.”

Which is not to say audiences can’t handle an edge. This past fall’s Almighty Voice and His Wife by Daniel David Moses “pushed a lot of hot buttons,” Boxall says, with its subject of colonialism and the effect on Canada’s Aboriginal peoples. On the other hand, Boxall says the play has had a great response on tour — especially from Aboriginal students.

Shows such as The Elmwood Visitation make one wonder why MTC wasn’t all over such a spellbinding project; the play could easily play not just any city stage, but any city.

“Beethoven might play the Mainstage one day,” Wiebe chuckles. And why not? After all, Patrick Friesen’s The Shunning, a recent Mainstage feature, was first produced at PTE — in 1985.

Between Then and Now: 20 Years of Theatre Projects Manitoba is now available through MTS Winnipeg on Demand.