And so is CBC’s Manitoba Scene – your new guide to local arts and entertainment!

As the title suggests, the piano takes centre stage in Armin Weibe’s The Moonlight Sonata of Beethoven Blatz.  But lurking in the shadows is the mysterious, sinister and possibly pagan companion of Mennonite New Years Mummers – the Brummtopp. 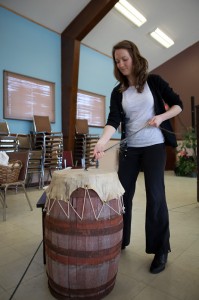 We were thrilled to discover Daria Puttaert is a natural on the Brummtopp!

When we talked about this unusual instrument with Jim Agapito at CBC, he knew he had a story – the Brummtopp seemed rather exotic…

But he also really wanted learn more about the experience of the playwright.  Even though Armin’s writing career stretches over decades, this would be his first time in the rehearsal hall and that would be an interesting view of the process!

The result is a story on the play on CBC’s Manitoba Scene featuring Armin’s Blog and Jim’s video which exploring the history of the brummtopp.

There will be more blogging and more photos from the rehearsal hall later this week!