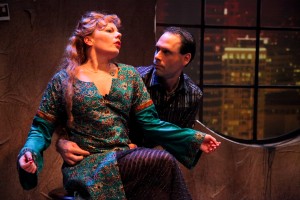 Locked-in romance leaves a lot to talk about

Once upon a time there was a beautiful princess with waist length blonde hair, inhabiting a tower where handsome suitors came to win her heart & kingdom.

That’s the story John understands when he arrives breathless, after climbing 33 flights of stairs, to the lofty lair of beatrice, a bored young woman determined to find her Prince Charming.  In her version of speed dating, she throws down three challenges to her candidates but none so far have been able to “interest, move and seduce her”, and so win a substantial reward.

In Carole Fréchette’s loopy comic romance, John & Beatrice, which opened the Theatre Projects Manitoba season on Thursday night, it quickly becomes clear that this is no fairy tale where love conquers all and everyone lives happily ever after.

Read the full and spectacular review!