Filmmaker and skateboarder, Hañwakañ Blaikie Whitecloud, is one of the talented artists who is working with TPM to explore and connect with the Interlake region. Last week he and his wife Tessa travelled through the Interlake visiting Winnipeg Beach, Arborg, Matheson Island, Gimli, Selkirk, and various sites in between.

What was your main intention during this trip through the Interlake and where is the project leading?

“Research, interviews and collecting stories while also exploring the land and being curious about the history of the space. Ultimately I wanted to know how people maintain their health through fun activities including skateboarding, hootenannies (an informal gathering with folk music and sometimes dancing) which we were invited to participate in at a local farm. What an amazing way to pass the time.”

You are a documentary filmmaker. How does this play into the project?

“I have the equipment! But also am patient with interviewing and have experience with asking the right questions. I am excited to use my favourite filmmaking tools which are the drone and a newly acquired Osmo Pocket. The Osmo is the size of big lipstick and has its own gimbal so I don’t have to carry around my old heavy equipment, it has really changed the game.”

“The drone shot is of Riverton, MB. A beached ship to the bottom right, to the bottom left is an old historic cemetery site which had been unmarked for some time. This is also just before the Icelandic river flows into Lake Winnipeg” – Hanwakan

And you’re also a skateboarder and planning to skate the Interlake skate parks along the way. Can you tell us a bit about that?

Originally I was hoping to grab a number of talented skateboarders to provide skateboarding demonstrations across the Interlake, however the ‘rona has put the halt on that plan. So now it’s discovering what our wonderful interviewees have provided as information for a story to latch on to. I am hoping to head back up and skate the parks, we were too busy this time to make it happen but I want to. I am definitely going to be touching base with the Selkirk skatepark community and am itching to tell that story since I had a small hand in designing the skatepark and was there for the grand opening. 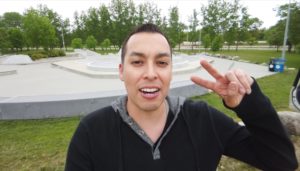 Anything you’d really like to touch on about the project?

I was interested in learning and that’s what the project is about to me, learning, appreciating, respecting, and having fun along the way. Our trip to Matheson Island was a highlight that was eye-opening because I cannot believe people still live up there, and are able to make a decent living, while also have a cable ferry that is free! We were joking as the ferry operator looked like he was about to hit us up for cash and we started guessing how much it would be but then he waved us on haha. 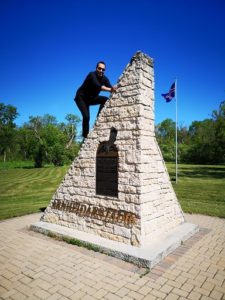 “This is the Arnheiðarstaðir ‘Eagle Heath Stead’ historic site which was the original homestead of Icelandic settler Johann Magnus Bjarnason. On the back of the monument is a map showing the locations of other homesteads in the Geysir district.”

Hañwakañ (Hañwakañ = ‘Northern Lights’ in Dakhóta) Blaikie Whitecloud is a mixed media storyteller who has called Winnipeg home since the age of five. Active in the business and skateboarding community as a mentor and leader, Hanwakan even has some skate-sons, as he’s stepped in to be a father figure for youth in need.

As a filmmaker, his work focuses on building identity for urban Indigenous youth. His latest documentary series is about Pow Wows across Canada (Living by the Drum: Canadian Pow Wows), and his current project explores celestial creation stories of Indigenous nations. As a skateboarder Hanwakan supports Indigenous youth to strive for their best selves by shirking the stereotypes and prejudices attributed to Indigenous and skateboarding identities. His most recent creation is an instagram guide to all the skateboard parks in Winnipeg (@wpgskateparks), a resource for skaters he always wished he had access to and has now created for the next generation. Hañwakañ is also an active volunteer, especially with 1JustCity, at their overnight emergency warming center. Hañwakañ and his wife co-facilitate workshops on reconciliation, systems change, and generally just have tons of fun together trying to make the world a little bit better. 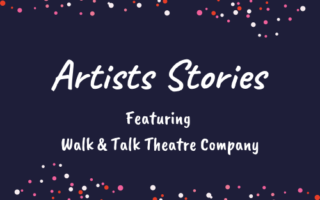 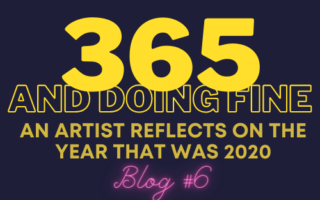